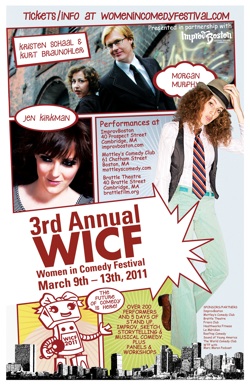 The Women in Comedy Festival
Through The Sights of One G.L.O.C.
by Leah Gotcsik

The Women in Comedy Festival took place in Boston, MA from March 9th through the 13th and since we could not sneak away from launch party planning duties to attend, we asked G.L.O.C. LEAH GOTCSIK to recap the festival and share some highlights.

I am in the bathroom talking up how fast I can pee as a community service to the rest of the line. I am also handing out my card. Welcome to the Women in Comedy Festival.

I have been going to this Boston-based festival with my sketch group, Somebody’s in the Doghouse, since it began three years ago. I’ve also performed with or near all of the hilarious ladies who run the fest, MICHELLE BARBERA, MARIA CIAMPA, ELYSE SCHUERMAN. The festival has been growing each year and this year it took off. Women (and men) came from all over to perform—NYC! LA! Both metropolitan Portlands! Canada!

There were big time sponsors–-WTF with Marc Maron podcast, the Sound of Young America, Rooftop Comedy, The Friar’s Club, and The World Comedy Club—and the festival was talked about from the Huffington Post, to Punchline magazine, to a live feed to SXSW (they had to get those ladies there somehow). There were amazing headliners, including RACHEL DRATCH, JEN KIRKMAN, MORGAN MURPHY and KRISTEN SCHAAL. And the all-important industry came. Jeff Singer, Executive Consultant for Just For Laughs, offered three sold-out workshops, checked out shows all weekend, and hit up the after-parties.

But the coolest thing of all was that we—women and men alike—were just doing great comedy, instead of talking about whether we could.

I was at the fest from Thursday to Sunday. Herewith, my top 5 highlights:

And, herewith (Boston is so historical I figured I could use this twice), my prediction:

Next year, the festival will be the place to see top women from across the country, and industry and press are going to be coming back in force. Word on the street is that JESSIE BAADE and KENDRA CUNNINGHAM got showcase spots on Just For Laughs shows as a result of the fest. This means that it’s going to be even harder to get in, ladies, so polish up your jokes! Also, maybe they’ll get some bigger bathrooms? I am laminating my cards in anticipation.

In the meantime, let’s do what we said we would at the festival—stay in touch, support each other’s shows, and get ready to party at the G.L.O.C. launch. It’s a movement y’all. Let’s keep it going.

I know a lot of G.L.O.C.s reading this were at the fest. What were your favorite moments?

Check out all the fabulous G.L.O.C.s mentioned in this post on our blogroll.

Leah writes and performs comedy in NYC. She improvises with Baby Wants Candy and The Made Up Musical and is one-half of the sketch group Somebody’s in the Doghouse, who were 2010 Friar’s Club Improv and Sketch Competition Finalists. She’s had a sitcom pilot in the New York Television Festival and recently sold a preschool script. Where my 4-year-olds at?  Leahgotcsik.com